Throughout the MBL’s history, biodiversity of marine organisms in the Woods Hole region has attracted biologists from all over the world. The Embryology class looked at various examples of annelids, crustacean, molluscs, hydroids, fish, and tunicates.  Each group had its special interest.  For example, William W. Ballard from Dartmouth College led the students to explore the variety of Coelenterates around Woods Hole in 1939. Students and professors sometimes searched from shore, but more often went out in boats to search, sometimes encountering the choppy sea that participants reported in 1939. Charles Cleveland Nutting’s 1900 monograph The Hydroids of the Woods Hole Region records the range of organisms available for the students to find and study.

The July 8 issue of the Collecting Net reported that the students felt quite sad when they were instructed to chop the heads off of their “beautiful and fascinating” Tubularia; it seemed a “horrible destruction.”   Yet “we all felt better when the next day we observed that each stalk was regenerating a head as beautiful as the old one had been.”  Studying these organisms introduced the topic of regeneration, which has been a central issue at the MBL from Thomas Hunt Morgan’s work around 1900 all the way to the current Eugene Bell Center for Regenerative Biology and Tissue Engineering.

Nereis worms provided another favorite subject for studying cell lineage. Studying their breeding habits started with going to the docks at night carrying lights to mimic moonlight, collecting nets, and finger bowls to grab the excreted eggs and sperm as the worms engaged in their mating dance.  Students would gather on the floating dock behind the supply department to collect the worms. 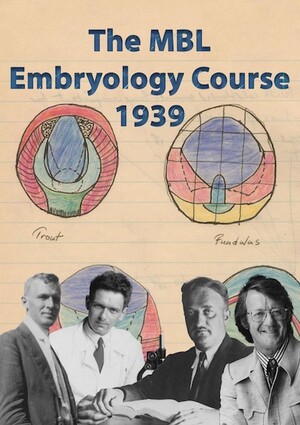